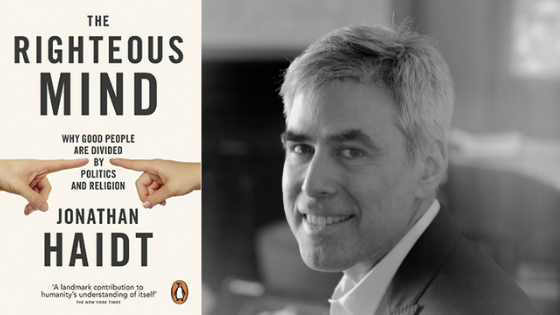 Jonathan Haidt is a miracle-worker. With the Righteous Mind, he may have accomplished the impossible – making conservatives and liberals intelligible to each other.

At the heart of this book lies the social intuitionism model and Moral Foundations Theory, Haidt’s biggest contributions to the field of social psychology. Haidt posits that rather than being rational, we find ways to rationalize our moral intuitions. The metaphor he uses is that of an elephant with a rider – the elephant being our powerful subconscious moral intuitions steered along the way by a rationalizing rider.

Political polarization happens due to conservatives and liberals having very different moral intuitions that blind them to the wisdom of each other’s ideologies. Of the 6 moral foundations that Haidt has identified (care vs harm, liberty vs oppression, fairness vs cheating, authority vs subversion, loyalty vs betrayal, sanctity vs degradation), liberals only care about the first 3, while conservatives care about all 6 roughly equally.

In other words, conservatives might have a more complex sense of morality than liberals, which helps them attract more people. The metaphor that Haidt uses (and he does love a good metaphor) is that we have different moral receptors corresponding to each of the 6 foundations, similar to how we have different taste buds for salty, sweet, spicy, bitter etc food. Liberals harm themselves in the polls by only appealing to 3 receptors, while conservative ideology appeals to all 6.

Another valuable insight from this book would be Haidt’s assertion of our dual nature. We are neither primarily selfish nor selfless – we are both simultaneously. We are 90% chimp and 10% bee – 90% individualistic and self-interested, but with a “hive switch” that turns on our “groupish” self-transcendent nature.

Of course, as a former highly partisan liberal himself (and now a centrist), Haidt has spent more time persuading liberals of the merits of conservative philosophy than the other way around. This going easier on conservatives would be my main criticism of the book. While I acknowledge the importance of all 6 moral foundations, I’m not particularly convinced that conservatives have it right in weighing all 6 equally.

Overall, The Righteous Mind is engaging, thought-provoking and makes us less judgemental of our fellow beings. Of all the books I’ve read, this would be the one I recommended the most to those who wish to understand human nature. It is potentially life-changing if you approach it with an open mind and heart.

Who Should Read this book:

Who Shouldn’t Read this Book: